The honest word on mountain conditions

It's snowing!! A late start on the expected incoming, but it's doing good things for us now! SW winds are on the up; mild temperatures prevail for another day before the arctic air takes over.

As Guinness told us, "good things come to those who wait". A late start on the expected snowfall means more atop the groomers today. We started up receiving around 5AM, so it's not yet showing on the accumulation charts, but don't let that stop you getting yours today! Everything is on the improve, so explore mode is on the cards once more! You want it; you got it!!

Please note: due to a Panorama/Nipika Nordic Loppet event, all Nordic trails will be delayed opening on Sunday until 1pm. Check details on the website.

LEGEND FOR LIFTS AND TRAILS

Closed =  Not expected to open today.

Delayed = Is not open yet, but is expected to open today.

Race in Progress = Closed to the general public. Terrain or lift open for racers, race organizers, race volunteers participating in the event abiding by event rules and safety regulations. 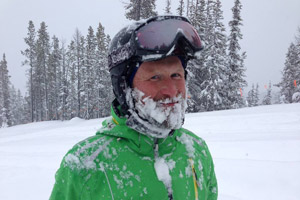 It's a new decade for the Wandering Wordsmith, fronting up for an 11th season to write stuff about the white stuff! Meet your Snow Reporter:

His office is expansive, the heating bills are low
The floors are far from level, but the feng shui has good flow
All around, the views abound, but not through a window
Out and about on our fair mount, sliding on the snow!

Analytical tools aplenty, intel from the brainstrust, the knowledge and wisdom of the Panorama Avalanche Office, reports from the grooming crew, and the processing power possessed by the Countess of Accumulation, all combine to resource and inform your snow report.

In conversation with a weather station; providing explanation of the information; finding inspiration in precipitation; it's an interpretation with imagination! Not languid with his language, he knows his semaphore from his metaphor and his airhead's from his oxymoron's. Leading you to the rough diamonds and well groomed alike, it's all about explain and infotain for a net gain in our terrain!

You can add extra days to your SnowCard or reloadable day ticket online or over the phone and skip the lines at the ticket window.