It's been all sun and views up top over settled valley cloud, but now the snow engine fires up again...

The dominant feature over the past week has been the high pressure ridge, causing a distinct lull in air movement through the region. Without the higher winds of previous weeks, we saw a break in the regular snow delivery and gained a visual appreciation of what the crew had been up to with overnight grooming. 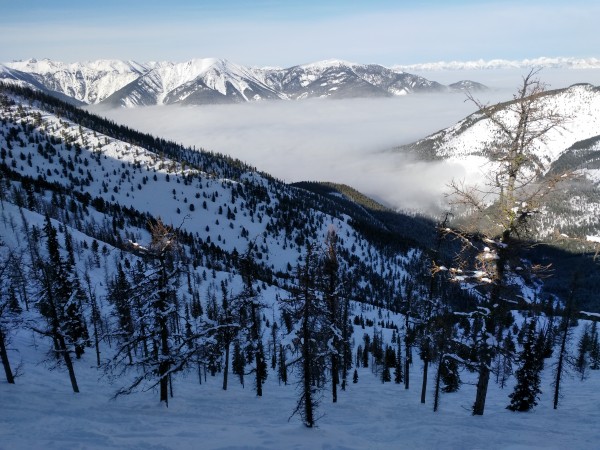 Looking back over Ktunaxa and Heli Face - soft snow awaits some turns. 13 Jan

We spent the end of last week still skiing powder turns down the likes of Millennium as well as in most of Taynton Bowl. Conditions were prime for showing off the mountain to some friends visiting from Australia who, after a couple of days here, were starting to regret having booked a week at Whistler to finish off their trip. Trading our vast, varied terrain and low skier to acreage ratio for the busy slopes out by the coast felt like trading a cruisey country road for a busy motorway. It wasn't just the far reaches of the double black terrain either - awesome groom in mild temperatures was soft like butter, and there was still so little traffic away from the main face of the mountain that we skied corduroy into the afternoons. 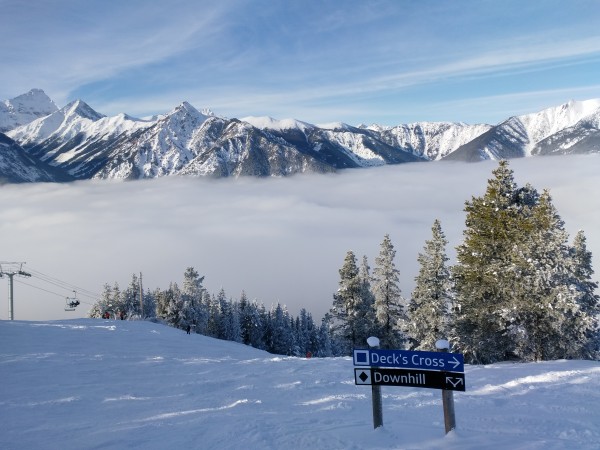 The weekend saw the beginning of the inversion weather pattern, where warm air aloft trapped cooler air in the valley, below a band of moisture. This played out as a low ceiling for the bottom half of the mountain, while the top half was sunny blue sky and views for miles over a veritable lake of cloud! Groomed paths at all elevations rode exceptionally well, with many long cruisers being made available. The summit hut was a popular hangout between laps, and with the warm temperatures and still air, the deck chairs were the place to be!

As we commenced the new week, I was starting to wonder when the change might come? The lack of air movement through southern BC due to the high pressure ridge had me making comparisons with a toddler in a tantrum, and indeed it felt as though the weather had gotten upset, taken it's toys and gone off home, leaving us in a void! The cloud layer had dropped a little to lower Champagne, and the inverted temperature differential strengthened, but those were the only real differences in an otherwise sedate pattern. We continued to ride on superior grip and rip corduroy, and bumps runs were soft packed with plenty of forgiveness. 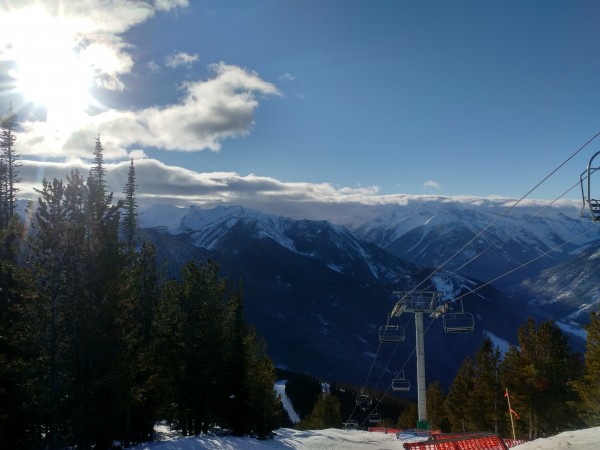 Enjoying the last of sunny blue sky from summit as the snow clouds build... 16 Jan

As rather cool temperatures greeted us each morning in the village this week, it's stayed quite mild overall up top. Snow is now skiing packed on the main runs higher up, with soft pack in the trees and for most of Taynton. Wednesday gave fast, grippy groom and still plenty of soft pack bumps as well as some looser, clumpy snow among the expanse of Taynton. The promised change began to exert itself, with the valley cloud layer retreating and breaking up, giving the village a taste of the sunny sky once again. In the afternoon, some new system cloud began building in the mountains to the SW, signifying a return to the regular flow of pacific systems across the province. Forecast models are showing precipitation likely later in the week and over the weekend, with amounts varying according to which model you favour. Therefore, it's 'watch this space' for snow to fly...