A week of sunny, blue sky, and now we look to the clouds for the next decent snow fall...

With only a dusting of snowfall throughout the last week, you’d be forgiven for thinking that it’s not good skiing, although fortunately, you’d be wrong! It’s such a ski hill thing to say “oh, you guys really need more snow”, and while we’d always take more, the truth is that general coverage is actually really good. I skied Heli High into Cauldron this afternoon (Wed 30th) just as an easy no hike option to take a look at conditions and was surprised by both the coverage and consistent quality of snow – soft packed where more tracked or soft loose. Indeed, I was more surprised to be making several turns in untracked snow, right down the middle! Once onto Taynton Trail, it dawned on me that I’ve not heard one negative comment about it this season. In the past, we’ve sometimes had the top section a bit iced up, or exposed rocks being an issue along the path, but with a groom almost every day this season, it has been in great shape anytime I’ve been on it. 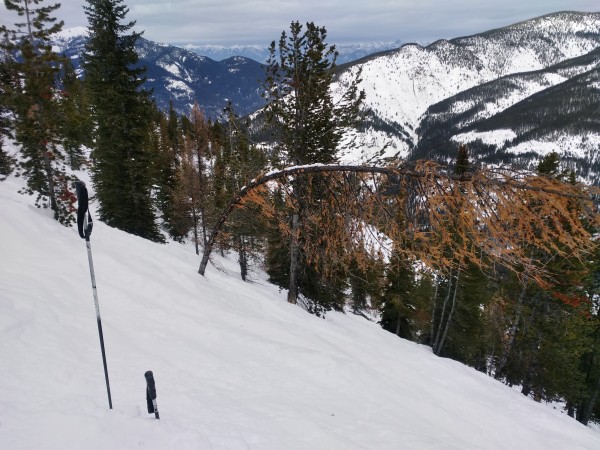 Heli High - the pole went deeper, but then you wouldn't see it at all! Soft? Check! Covered? Check!

My afternoon scout about came after hearing talk of how firm the mountain was. Although the groomers with a snowmaking base are hardpacked, they still offer plenty of grip and were skiing with a soft forgiving layer on top. Riding the lifts, I was listening for the telltale scrape, but only heard edges cutting into the surface. Skiing upper Skyline I found it running fast and as the edge held nicely, I had plenty of confidence laying it over and showing the base of the skis. Skiing natural snow this past week has been the pick for soft groomers, with semi-regular treatments through Sun Bowl and Founders Ridge routes delivering consistently good turns.  View and Stumbock’s have also been coming up well with regular groom for the weekends. Our grooming crew have been at the top of their game, giving us decent corduroy day after day, and are working on extra projects such as a rebuild of some features in Horseshoe terrain park.

Rounding things out, I went for another top to bottom, this time starting with Zone 2, where I found soft pack snow, and yes, once again, more than a few turns in untracked! Down into Mocha, there was some exposed rock in the narrow entry, which quickly opened out into some consistent, soft windpack on the open face, which was a joy to ski! Dunes had a few exposed areas on the breakovers, but had pretty good coverage overall for the soft pack bumps. With a taste for soft bumps, old favourite Tacky was a draw and didn’t disappoint. Packed bumps with a little softness were sufficiently forgiving to ski a tight line all the way down. 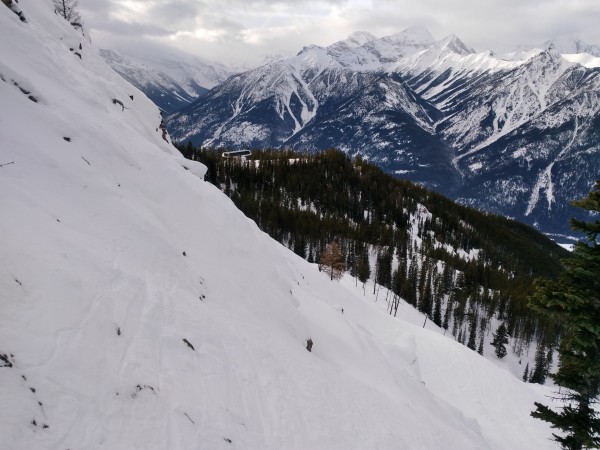 Some exposure in the Zone - it was great, open face skiing just below this entry point!

Looking forward to the weekend, it’s mild temperatures and snow in the forecast. Models are varied on timing and amounts, so we’ll just take it as it comes, safe in the knowledge that as things are pretty good already, with new snow, it’ll only get better!