A bit of of everything really, where sun and snow top ups all added to the experience.

With late January being a traditionally quieter period, many of our destination guests can’t quite believe their luck with quality conditions, no lift lines and light traffic on the vast majority of runs! We must come across as a little blasé when we say “oh no, we’re quite used to having our pick of lines on the mountain and to not see anyone else on our run”.  From the Brits, Europeans, Aussies and Kiwis alike, our breadth of terrain and room on the runs is a big feature of their stay with us (and that’s before we’ve even shown them the tranquillity of the Extreme Dream Zone or the off the ridge options of the massive Taynton Bowl)!

A little top up snowfall bookended the week, and has helped to maintain a level of softness throughout. Last season was full of continual small top ups and reminded us how much just a few centimetres can do for the mountain. Groomers have been on pretty sweet form overall, and ran a little faster a few days with some cooler overnight temperatures setting up the early shift runs, but nothing a good edge and it’s confident use couldn’t handle (and extract some exhilaration from too, while you’re at it!). We had a few days where I’d be expecting things to be ho hum, going for a casual slide, and I’d hit some soft yet responsive groom that had me either ripping hot laps with big carves, or savouring the steeps with some fast short radius turns. We’ve been known for our grooming over the years, and in combination with improved snowmaking technology, we’re doing more of it and with better quality than ever before! 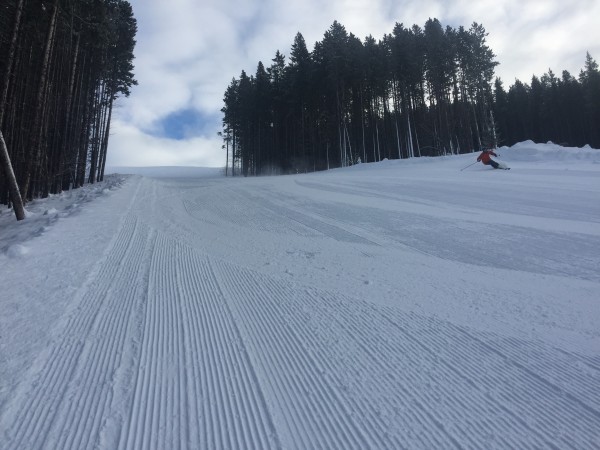 Moving off groomed terrain has been a pretty fun alternative this week too, with the Sun Bowl drawing me for several return visits as lesser groomed runs gave some nice light loose on packed powder to play in. It’s one of those spots where I tend to look around each time and mental note to go and check out another route next lap, as the variety of lines, pitch and terrain can provide new adventure time and again. Just yesterday, I ripped turns down upper Stump Farm into Sunseeker and wondered why I’ve not been doing this cruising line that can be casual or speed building more often?! I’ve also been hitting up some pure bumps runs while the snow has been soft packed, and Tacky is often my go to. If you’re tempted to break into the bumps, but are wavering on commitment, Downhill had a bit of levelling done this week on skiers left, while the changing fall lines on skiers right still hold plenty of challenge. Whiskey Jack had some similar work done and is a favourite warmup for one of my colleagues. Upping the ante into Gunbarrel finds bigger bumps in that similar soft condition, while the undulating waves of Dunes hold some good snow on mellow rolling bumps as you avoid the odd bit of exposure on the breakovers. 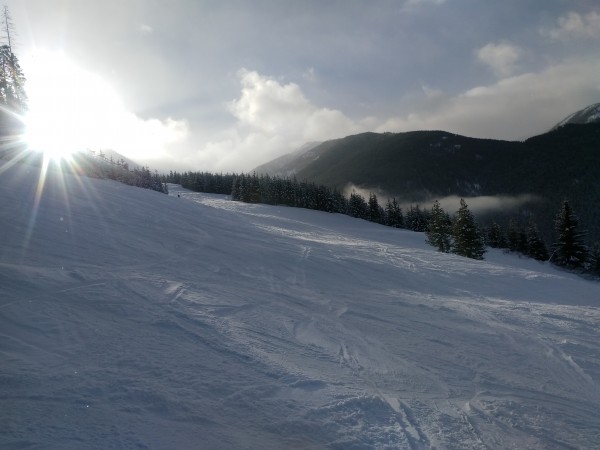 Taynton Bowl is showing generally packed conditions especially thorough the fall line gully and ridgeline type runs (think Donnie B’s and C-Spine respectively), although lesser tracked and even still untracked lines have been found with some hiking and/or local knowledge. The prize pockets have generally been the open sections accessed through tight trees, so if that matches a profile you know, go search out your stash! I went for the short first hike up from the gate yesterday and skiing some tighter trees off regular fall line found my frontside skis sinking into deeper powder than I’d expected, prompting me to note to self: pull ‘all mountain’ from the quiver next time!

Upcoming weather sees a continued gradual warming trend peaking with some sunny sky on Saturday, and the chance of some precipitation coming in on Sunday via a descending northern front. A little bit of everything once again!